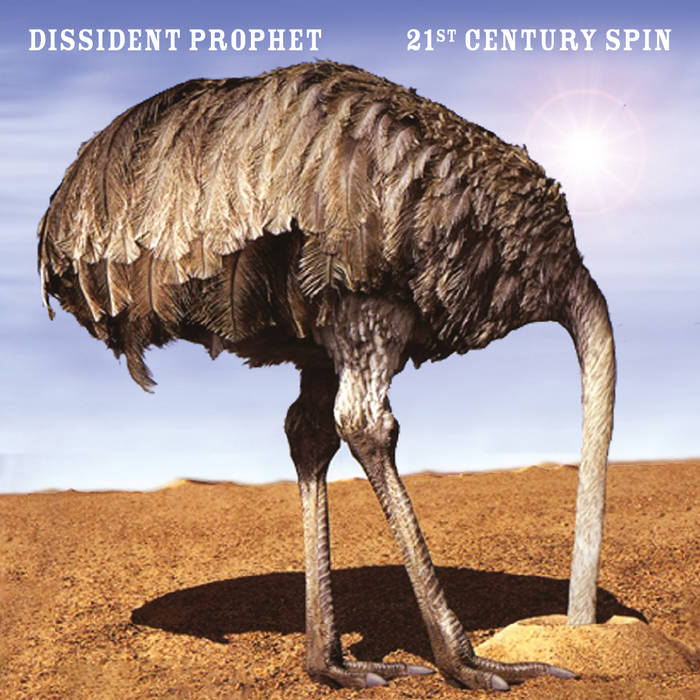 Tony: Talk us through some of the lyrical themes running through '21st Century Spin'.

(Collin Burton) Some of our songs are about the times and the signs ("Rev 13:16", "Thief In The Night", "21st Century Spin"). Others, such as "Dirty Water" and "Keep My Lamp Burning", are a call to the Church to reject false teachings and stand against apostasy. There are also evangelistic songs such as "What Would It Take?", "Do You Know Love At All?" and songs of encouragement such as "Hold On".

Tony: What's your view of the Church in the UK?

(Andy) The times we're living in now are similar to those of Jeremiah's day. He warned God's people not to run to Egypt (the world) because they would be put to death by the sword, nor be taken in captivity to Babylon (one-world religio-political system). In Jeremiah's time, there were false prophets such as Hananiah who prophesied peace, safety and victory (Jeremiah 28). We are warned in 2 Thes 2:1-12 about such prophets and teachers. In the Church of today, there are many false teachers and prophets who are tickling people's ears with honey-coated words saying that we will take the world for Jesus and Christianity will be revered, when, in fact, Jesus told us that we will be hated like he was hated (John 15:18-20) and that the Son of Man will scarcely find faith when he returns to earth (Luke 18:8). The sweet promises of the false teachers are far more appealing than the real truth and so many Christians become duped and disillusioned. This is what our song Dr Feelgood is about. Judgement starts with the house of God; Jesus' wrath was poured out on those who prospered from the blood of the Lamb (Mark 11:15-19). However, it's not all bad news for the Church! There are many churches out there that address the bitter truths and are remaining faithful to the true Gospel and the teachings of Christ (1 Kings 19:18). It is these faithful Christians who are being rendered "Pharisees" when, actually, the New Testament exhorts us to be like the Bereans who examined the Scriptures and tested the words of their teachers. We should look forward to his second appearing with great hunger.

Tony: What do you think '21st Century Spin' will achieve?

(Andy) We hope the album serves as a wake up call for sheep who are being led astray by wolves and are ending up in Babylon. We're not being political or anything like that; we're simply warning sheep in the Church, both through our lyrics and the artwork. Inevitably, we will offend people because we are stating truths that they don't want to hear! The Gospel itself is offensive to people; we're telling people that they're helpless sinners and that the only way they can avoid going to Hell is by accepting Jesus. The Gospel is not about a couple of "Jesus loves you verses"; there needs to be a conviction of sin!

Tony: Is the root of the Church's problem tied up with its attitude to the Bible?

(Andy) One of the major problems in the Church is that they don't exercise proper biblical exegesis; they don't root out false teachings because they don't want to criticise or offend (and so error is allowed to breed). Our God is very patient; he warns us over and over again, but eventually he has to bring judgment on it all ("Not In My Name"). Jesus didn't say that standing up for his truth would be easy - he told us that it would be difficult and that we will get criticised. Read the lyrics that are printed in our booklet; we hope it is clear that we want to address the very issues that I have outlined here. We want to see a return to the true Gospel (and not the wishy washy "lovely" Gospel that is presented) and we want error to be rooted out in the Church. We have to warn people of deception and that's what the album is about. Too many bands gush superficial warmth and fluffy joy; we, on the other hand, are about the less comfortable truths because these need to be addressed now. We refuse to compromise just because what we say isn't "nice" and we might "offend" someone; people need to be warned of deception. We're willing to take the flack for what we're standing up for. Noah was mocked by everyone when he was building the ark and in the same way, we'll be laughed at. Perhaps our "thanks" are a bit tongue-in-cheek and we are very aware that some people will take it badly. That said, I hope the 2 Thes 2:1-12 verses that we have included and the lyrics in the booklet will qualify our "thanks" and make our point clear. At the same time, we are very happy to talk with people who are confused about the people we credit in the booklet.

Tony: What plans do you have for the future?

(Mel) God willing, we plan to play gigs to promote the album a bit. We hope to reach all those who have ears to hear. The good news is only good if the bad news is heard first; we need to encourage people to get in the lifeboat before the ship hits the iceberg.